MEDIATE: The Circulation of Books and Ideas in Eighteenth-Century Europe.

During the eighteenth century, private libraries of Jewish owners were regularly auctioned in the Dutch Republic, usually after the death of the former owner. To publicize these auctions, booksellers distributed printed catalogues listing the books to be sold. These – mostly Hebrew – private library catalogues are a rich source for the history of Jewish book culture and book trade. They document book ownership of Jewish collectors, and provide a peek into an early modern library, the owners, reading interests, and intellectual ambitions. At the same time, the catalogues represent the second-hand market of Jewish and Hebrew books, and we are only beginning to get a view of the large number of books that were circulating in the early modern period. While many auctions were held in the Dutch Republic, only a small percentage of the auction catalogues have survived.

The European Research Council-funded MEDIATE project (‘Measuring Enlightenment. Disseminating Ideas, Authors and Texts in Europe, 1665-1830’), led by prof. Alicia C. Montoya, studies the circulation of books and ideas in eighteenth-century Europe by drawing on a unique database of library auction catalogues, that is currently being developed. The public version of the MEDIATE database Sandbox will be launched in early 2022, during the MEDIATE project’s closing conference. Within this project, I focus on book ownership among the Jewish communities in the Dutch Republic, and I am responsible for the Jewish material in the database. At present, almost 40,000 transcribed and fully searchable descriptions of items – mostly books – from forty printed auction catalogues of Jewish-owned libraries are recorded in the MEDIATE database. This open access relational database brings together data from a corpus of six hundred catalogues of private libraries sold at auction in the Dutch Republic, France, the British Isles and Italy between 1665 and 1830. There are long-term plans to expand the corpus to two thousand collections. By including Jewish and Hebrew sources in the dataset, this project allows historians to integrate Jewish histories into a broader book-history research project.

Currently, the catalogues are made fully searchable by a combination of OCR-generated transcriptions, manual post-correction, and data enrichment. While recognizing and distinguishing between Hebrew characters has proved to be a challenge, the results are encouraging. Every single lot in the catalogues is matched to relevant external identifiers or authority files, including VIAF for authors and works, and the CERL Thesaurus for publishers and places. The data can be exported by end users as a simple Excel or CSV file. Furthermore, MEDIATE aims to link its data to other existing bibliographic and bibliometric databases.

Our bibliometric approach will make it possible to answer questions relating to the presence of specific works (titles and authors), particular editions (places and years of publication), and the materiality of the listed items (binding, paper, and annotations). For example, one can identify which book titles a specific collector possessed, or, more generally, which authors were likely to be found on the shelves of an eighteenth-century library. Focusing on my own research within this project on book ownership among the Jewish communities in the Dutch Republic, I will explore questions such as: what are the characteristics of a Jewish book collection, and what differences exist between Sephardi and Ashkenazi collections? What patterns of trans-regionality and what patterns of accumulated culture can be distinguished? To what extent do the books listed in catalogues reflect the polyglossia of Jewish culture? In addition, it will be possible to track diachronic developments: how Jewish book ownership changed over time, and how these changes may be related to broader cultural developments, including the emergence of new ‘Enlightenment’ ideas and books.

These detailed comparisons of the book collections can help historians get a more complete view of early modern book ownership on different levels: individual collectors, regional or national levels, and religious affiliations. Based on these catalogues, it will be possible to map the European second-hand book trade, as well as the intellectual and material cultures reflected in these libraries. More specifically, the database provides a means to better understand the unique role of Dutch Jewish communities within European book culture.

The MEDIATE project (2016-2022) is based at the Radboud University (Nijmegen, The Netherlands). Other team members are Helwi Blom, Evelien Chayes, Rindert Jagersma, Juliette Reboul and Joanna Rozendaal. For publications see here. 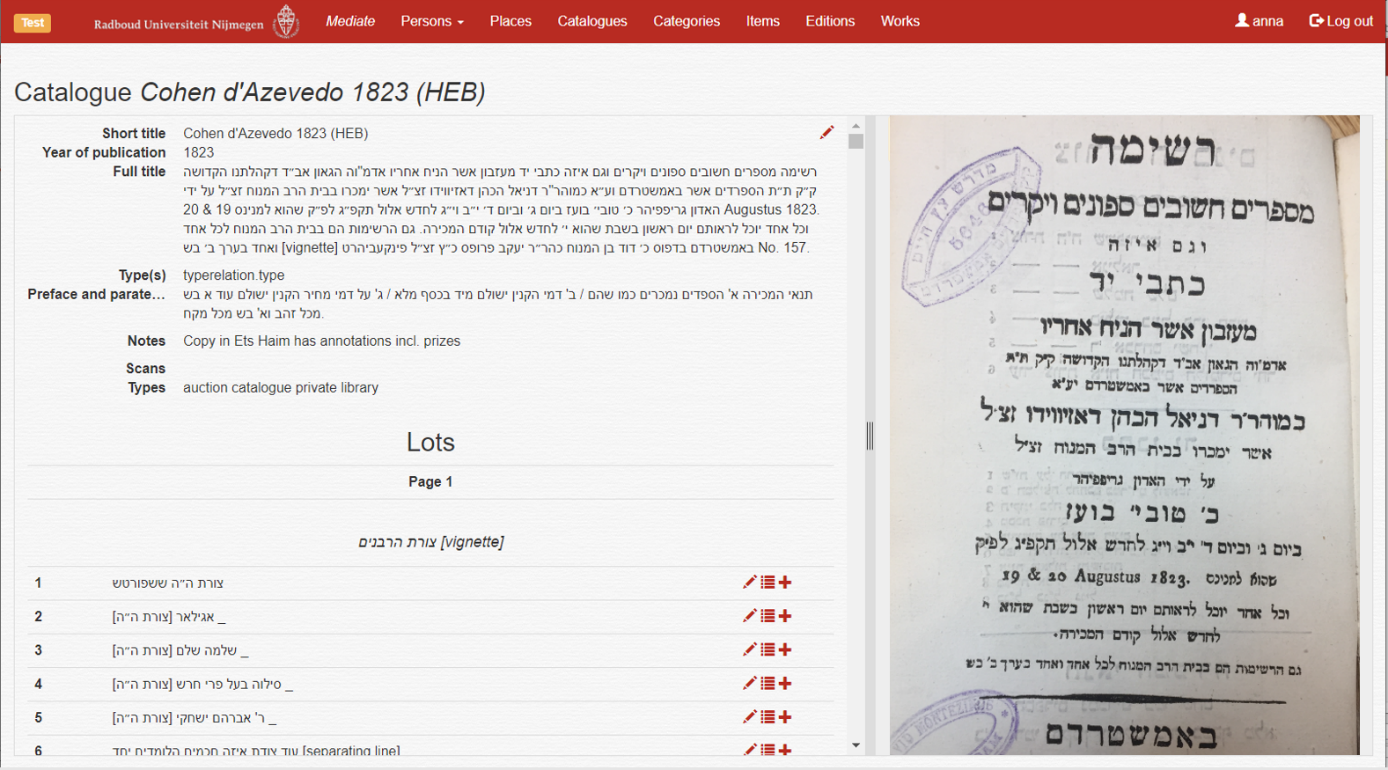 The EAJS condemns Russia’s unprecedented and barbaric aggression against Ukraine. We express solidarity with Ukraine, with its democratically-elected government and with its people. All Ukrainian academics and university students are in our thoughts and prayers. [Link for longer version of statement and resources]