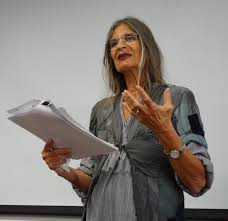 The European Association for Jewish Studies mourns the untimely passing, after long illness, of Professor Ada Rapoport-Albert (26/10/1945 – 18/6/2020), a distinguished scholar of Jewish religious history and spirituality. She excelled in the interpretation of Jewish mysticism, of Hasidism, and of the Sabbatean and Frankist movements. She combined sheer universal knowledge of Jewish civilisation with deep erudition in her fields of expertise, and with a keen interest in the impact of gender on religious thought and practice.

Professor Rapoport-Albert had come to London from Israel in 1965 to study Jewish history with Joseph Weiss, and completed her PhD under the supervision of Chimen Abramsky. Her charismatic teachers, the unique opportunities of an ambitious and radical university such as University College London, the dynamic of a comparatively young field such as Jewish Studies provided fertile grounds for a long and distinguished career as scholar and academic teacher. London became home – not as far away as the United States from her native Israel, but also not as determined by political and social affiliations as the young Jewish state.

Her academic home for over 50 years was the Department of Hebrew and Jewish Studies at UCL, for which she served as Head of Department for ten years (2002-2012). She was president of the British Association for Jewish Studies and of the Jewish Historical Society of England. Solicited by distinguished universities across North America, Europe, and Israel, she generously shared her expertise through multiple visiting positions, including Harvard Divinity School, Stanford University, the Institute of Advanced Judaic Studies at the University of Pennsylvania, the Ludwig-Maximilians University in Munich and the Spanish National Research Council in Madrid. Professor Rapoport-Albert was involved in several academic events supported by the EAJS, and was awarded a Distinguished Panel at the 11th EAJS Congress in Kraków in 2018.

Professor Rapoport-Albert had a unique network of colleagues and friends across the world, and among all generations of scholars. To the latest stages of her distinguished career, she remained a source of inspiration for scholars of the youngest generation. While always curious to learn about new interpretations and perspectives, she never lost sight of the canon – neither the religious nor the scholarly one. She certainly was proud of the academic lineage leading from Scholem to Weiss and thus to herself. Professor Rapoport-Albert was passionate about languages in general, and Hebrew and English in particular – sometimes to the chagrin of her doctoral students, to whom she would return chapter drafts time and time again with her unrelenting ambition for precision and style. A uniquely independent, generous, and kind human being, the cosmopolitanism of one of the world capitals suited her well. She followed the belles-lettres in both Israel and in Britain. She loved the theatre and opera stages of London. She is survived by former husband Bill Albert, and her two children, Maya and Saul, and Yishai, her grandson.

Professor Rapoport-Albert excelled as author as much as an editor. Among her works are: Women and the Messianic Heresy of Sabbatai Zevi: 1666–1816 (2011), “Something for the Female Sex”: A Judeo-German Manuscript from the Circle of Jacob Frank’s “Believers” in Prague at the Turn of the Nineteenth Century (Hebrew, 2009). Essays in Jewish Historiography (1991), Studies in Hasidism, Sabbatianism and Gender (Hebrew; 2015) and Hasidic Studies: Essays in History and Gender (2018) are volumes of collected chapters and articles. Among her edited volumes are Hasidism Reappraised (1996) and Jewish History. Essays in honour of Chimen Abramsky (1998). Most recently, she edited with Marcin Wodziński vol. 33 of the yearbook Polin. Studies in Polish Jewry, on Jewish Religious Life in Eastern Europe (forthcoming 2021).